Blockages in the heating system

This month we have attended many conventional systems (with a header tank and hot water cylinder) that are just not working properly – or even are not working at all – due to blockages in the system. The symptoms usually start with the radiators not all heating up. Often the boiler starts getting very noisy and gradually the radiators will get worse until they hardly work. At the same time the hot water also fails to heat properly.

Blockages are usually caused by rusty debris in the system. All systems should be treated with an anti-corrosion inhibitor so that the steel radiators do not rust in contact with the water in the system. We often find that poor system design means that air is sucked into the system introducing dissolved oxygen which increases the chance of rust even when inhibitor is present. 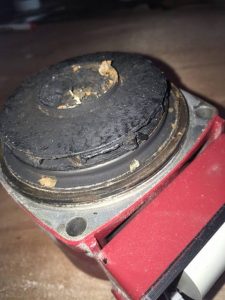 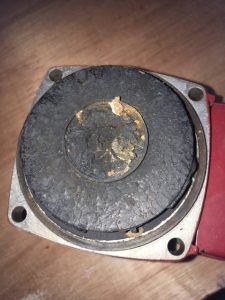 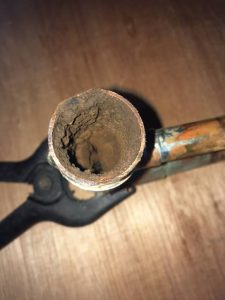 Treating blocked systems is a speciality of ours, but even so these are tricky problems to diagnose correctly. Overheating and noisy boilers can also be caused by a weak pump, so unless we are certain of our blockage diagnosis, we will normally change the pump first. In any case, if the system is blocked by debris, the pump is also very often blocked and damaged. Changing the pump also allows us to see inside the system and the pump and its valves will often collect debris letting us know that a blockage is likely. We examine various parts of the system, in particular where pipes such as the open vent and cold feed go to the header tank.  In the end the best remedy is usually to cut out the pipework where the blockage resides and rebuild it, modifying the layout or completely removing the heating header tank fitting an expansion vessel and safety valve in its place so that air cannot be introduced. Occasionally boilers themselves block up and this requires various approaches depending on the design of the boiler.

Where we suspect that there is a considerable amount of debris left in the system a Powerflush clean using a large pump and cleaning chemicals will help to remove the majority of this.

We also fit magnetic system filters (the Magnaclean is one of the best) to catch any debris as it circulates round the system. And, of course, a good quality inhibitor.

If your system seems to be getting much less efficient, it might be time to call your engineer before it completely stops.

Page load link
This website uses cookies and third party services to give you the best experience. Agree by clicking the 'OK'. Ok
Go to Top